After having checked the various type of solutions available (portable cooler plugged on the cigarette lighter, absorption coolers than runs on multiple power sources, special fridges running on 12v, etc...) we finally decided that the best for us was to actually go for a good old standard 220 volt fridge, just smaller - so it would fit in our installation.
The main reason was that portable and absorption coolers are only able to get a certain number of degrees under ambient temperature so you will never get ice in them, and the 12 volt appliances are way too expensive for what they are.

Since we already decided to have an inverter in the car, we just had to plug the 220 volt fridge on it.

Considering how cramped the interior of the Valp is, we decided to install it right behind the driver seat, over the technical compartment where the batteries and other electronics are installed.

This required a bit of measurements, because we still wanted to be able to have enough room to put a full length bed!

It all started with the creation of the technical bay which was presented on the previous article.

And by the way, most of the cutting and installing was done outside on a parking lot, and was 100% powered by our battery bank and solar panels! 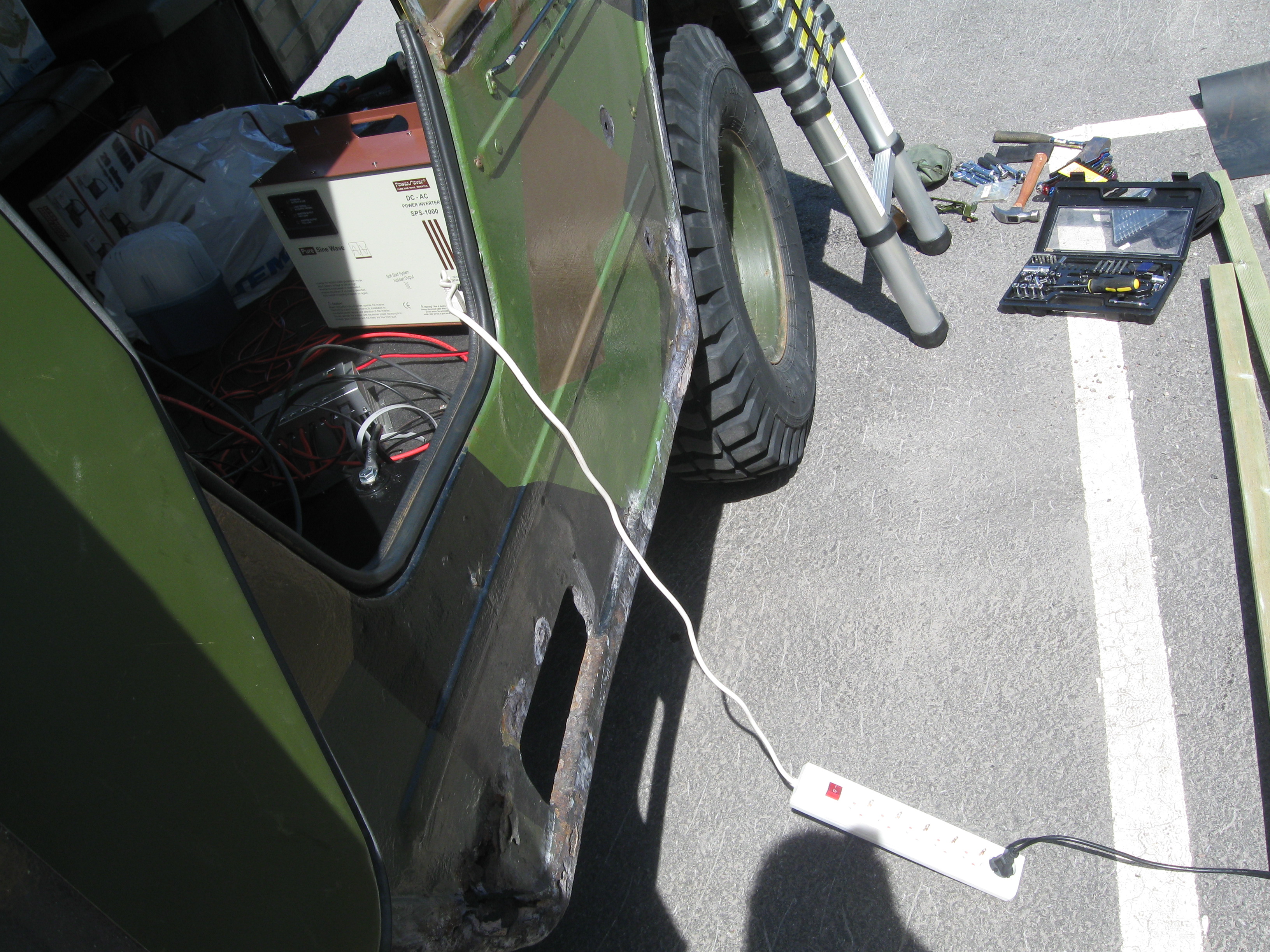 Self-powered
Since after installing all our wood boards we would not be able to access some parts of the vehicle, it was important to proceed first to some rust removal and sound dampening. 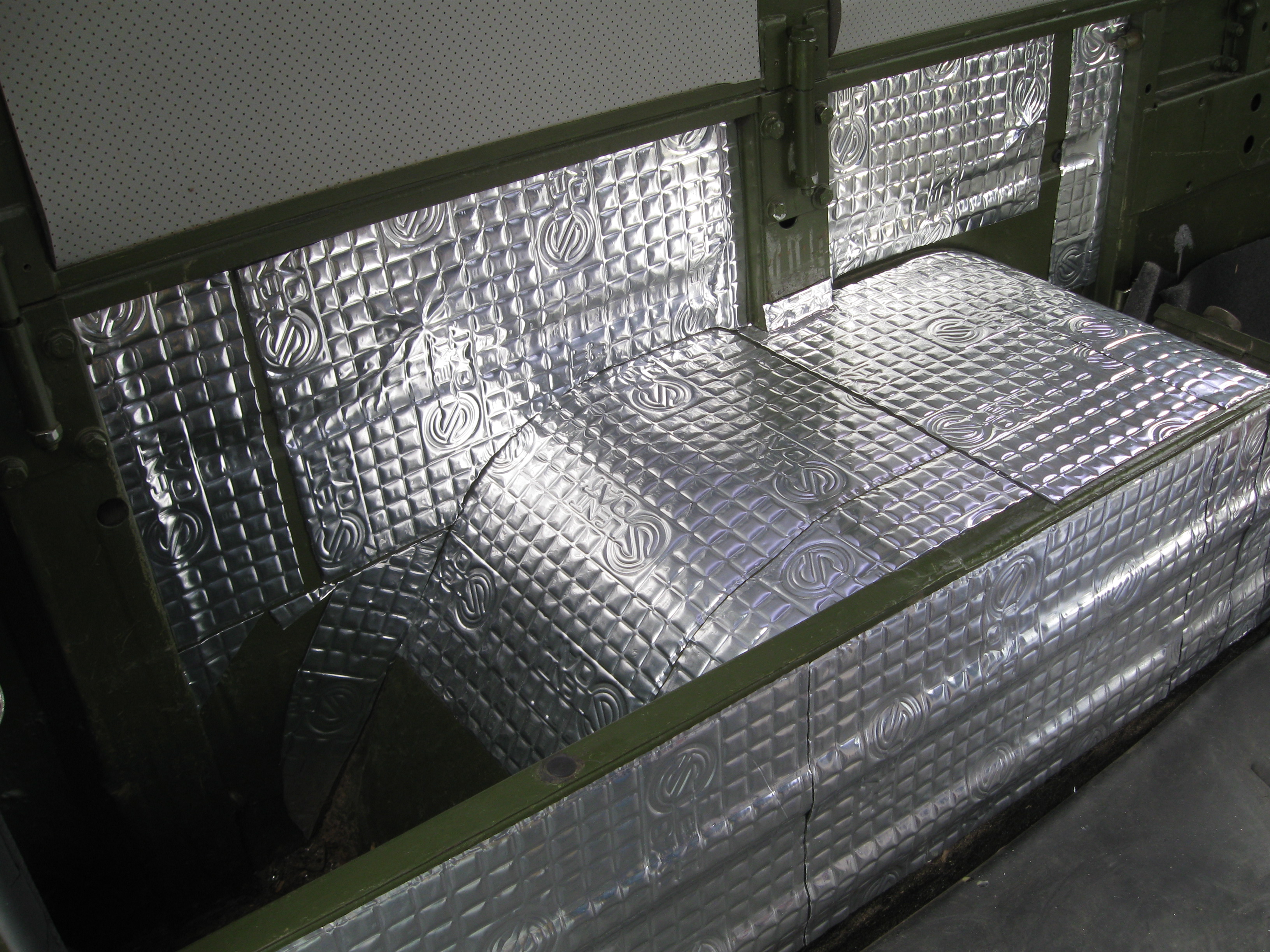 Sound dampening
Few weeks earlier I had bought some sound dampening plates, and I installed them in all the hollow parts of the car, and it indeed improved the sound quality by filtering out the "tin can" effect. 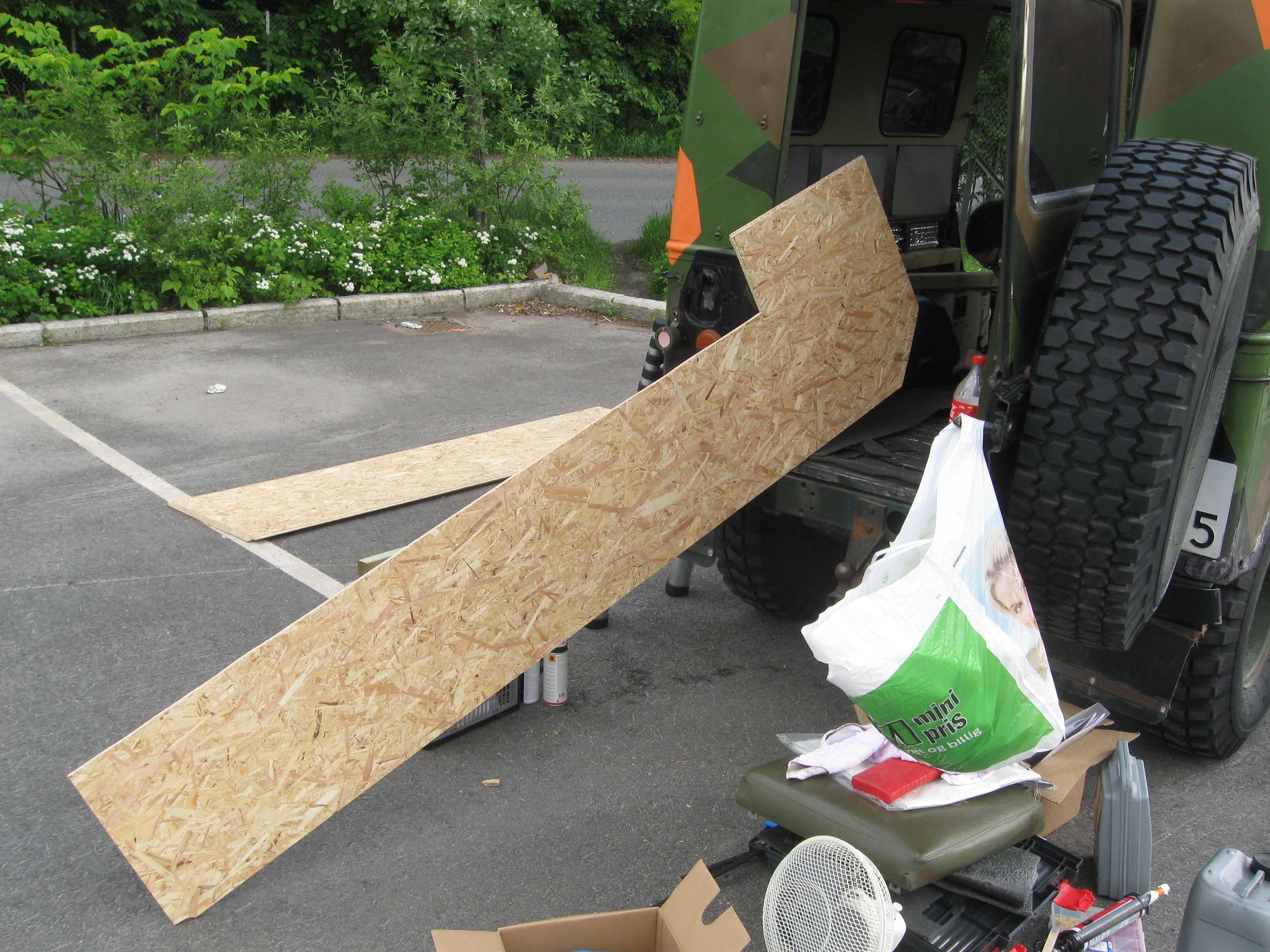 Side board shape
An interesting thing about the Valp, is that it looks like a box, but none of the apparently straight dimensions are actually straight.

Something as basic as having a board going from one side of the cabin to the other side, ended up having to be re-cut multiple time with small notches there and weird angle cut there.

After a while we finally managed to get the main board cut at the right dimensions, but the problem continued to hurt us for basically everything we had to cut.

It's incredible how even using a laser meter you can miss the fact that the shape slightly opens or closes in the middle... 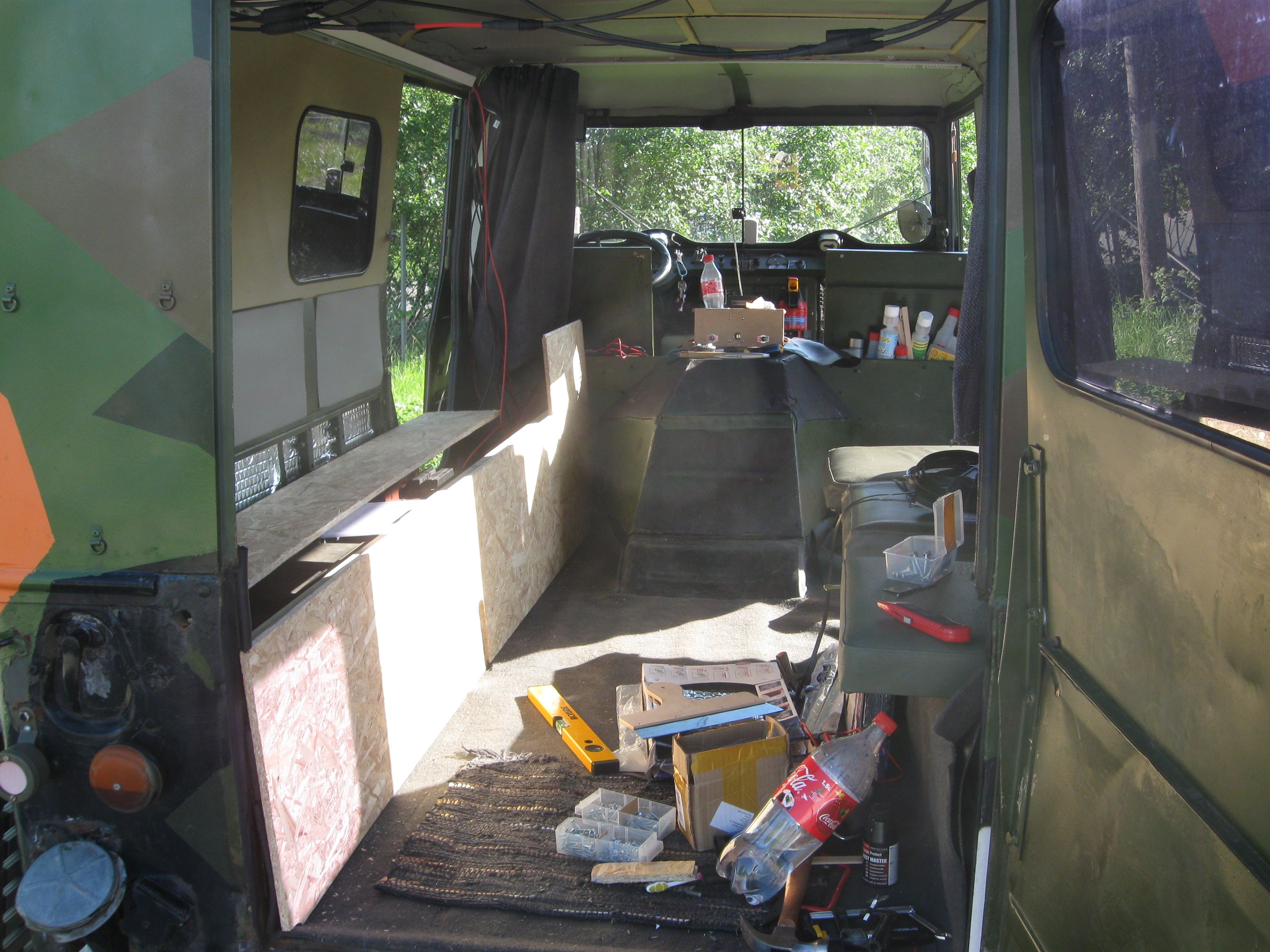 Side board installation
The main board is basically made of two parts:
The reason for the elevated section is that we had to be able to open the door of the fridge, so it had to pass over the engine compartment. 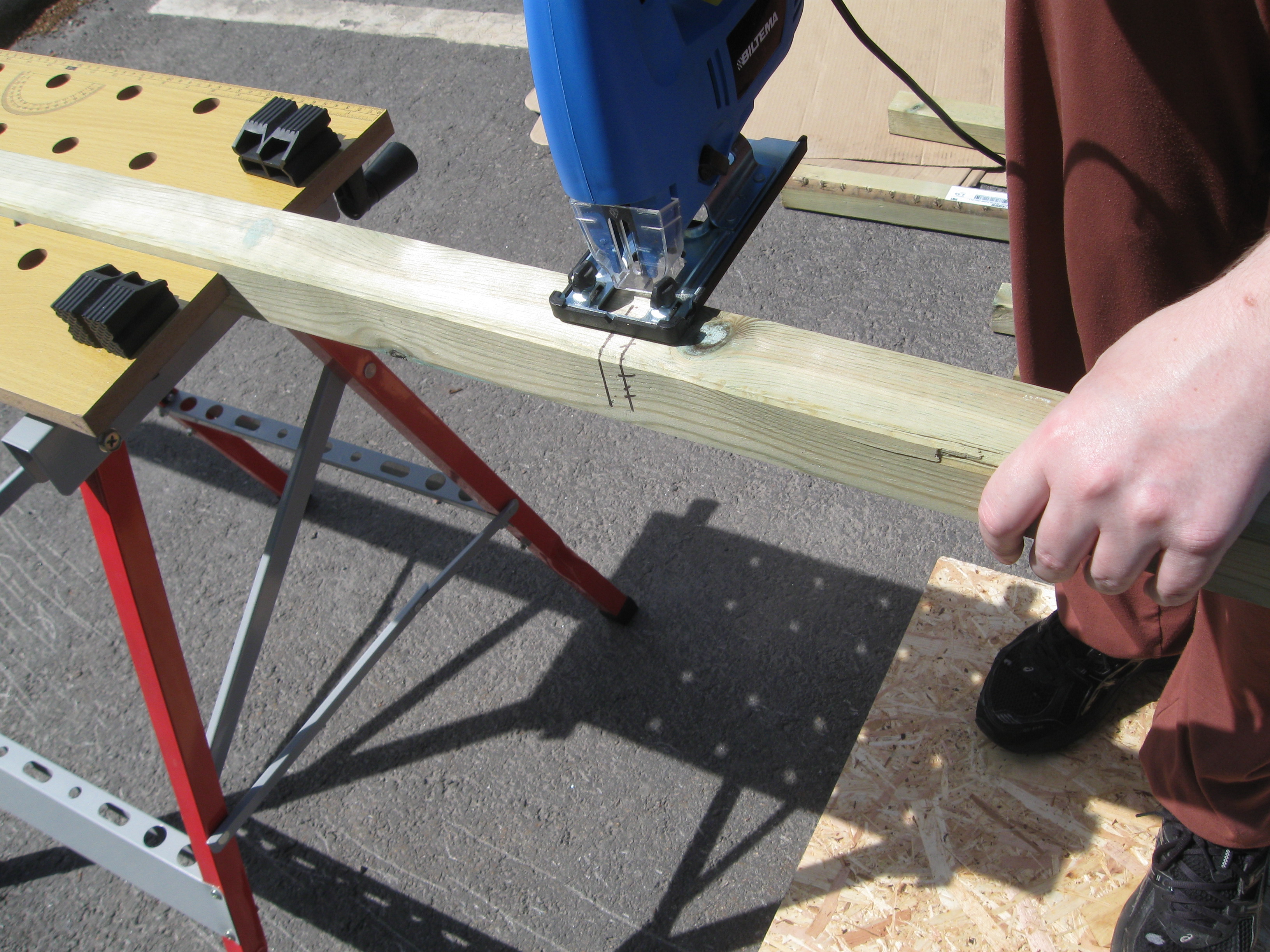 Cutting 4x4
To provide physical strength, we reinforced the structure with 4x4 beams and too many angle-brackets too count.

Fortunately, the hack saw did not fail in its task, which is a good thing considering the amount of stuff we used it for1.

An important parameter to keep in mind when doing this kind of job, is that you should not try to be millimeter perfect: If you align everything perfectly, if all your means have zero margin for movement then the vehicle will be very noisy due to the deformation of the frame when moving over uneven ground making metal and wood get in contact. 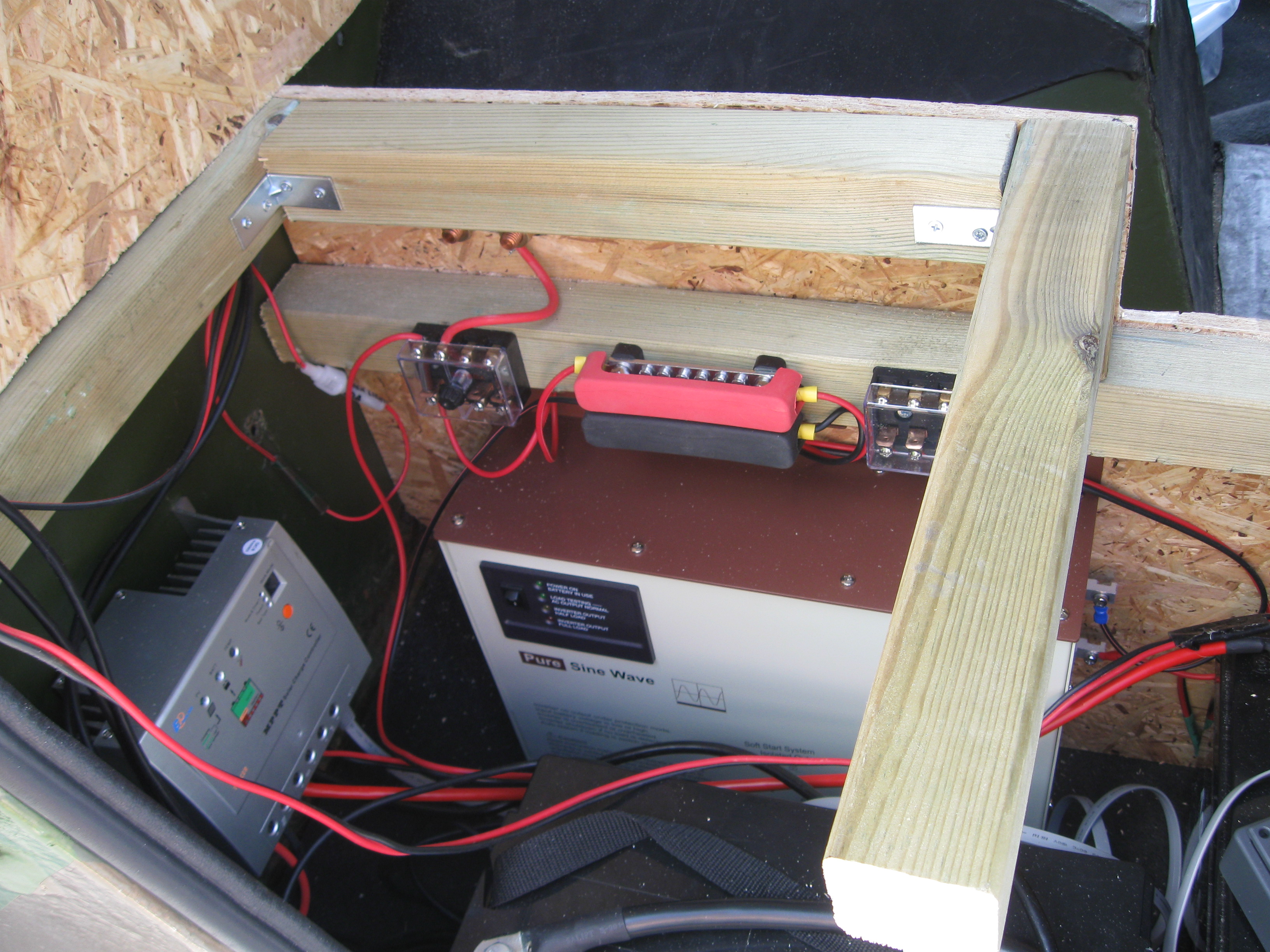 Platform frame
The build of the platform for the fridge was comparatively easy, all we had to do was to build a U shape, and then cover it with a plywood board. 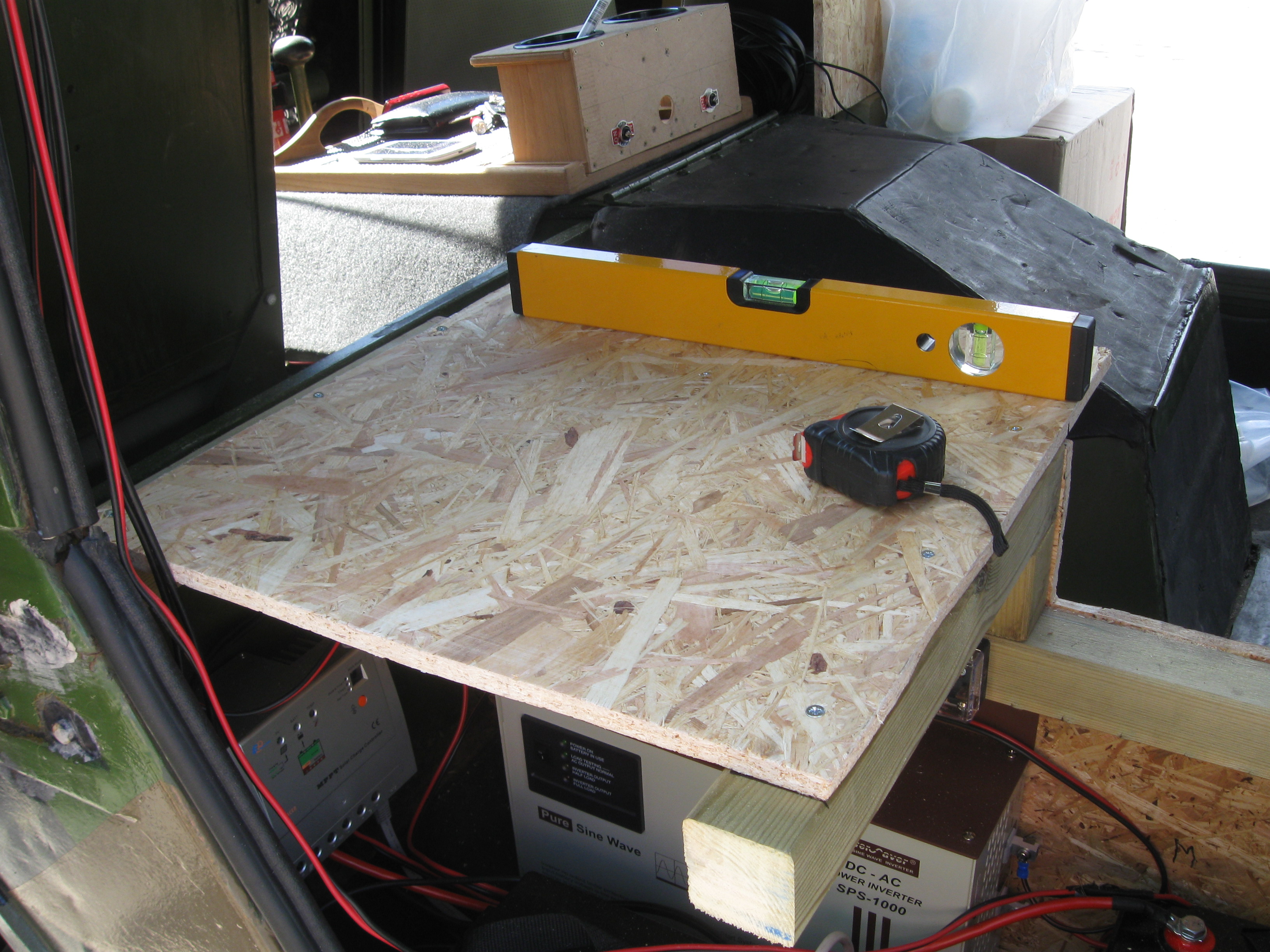 Fridge base
The only very important thing here, is that the vehicle should be parked on a perfectly flat ground, and then you should use a level bubble to check that your platform is actually properly horizontal.

Failing to do so will result in a very noisy fridge, an unhappy compressor, and possibly an early failure of the fridge.

In our particular situation another annoying parameter was to find how far in the back the platform could go, because when closing the side door of the Valp it would move inside more or less depending of how violent you would slam it.

Obviously banging a metal door inside a supporting structure each time you close it, definitely is something you want to avoid.

Originally the Valp had no walls behind the front seats, and because it is very tight it would not have been possible to rotate the front seats as seen in many camper vans. 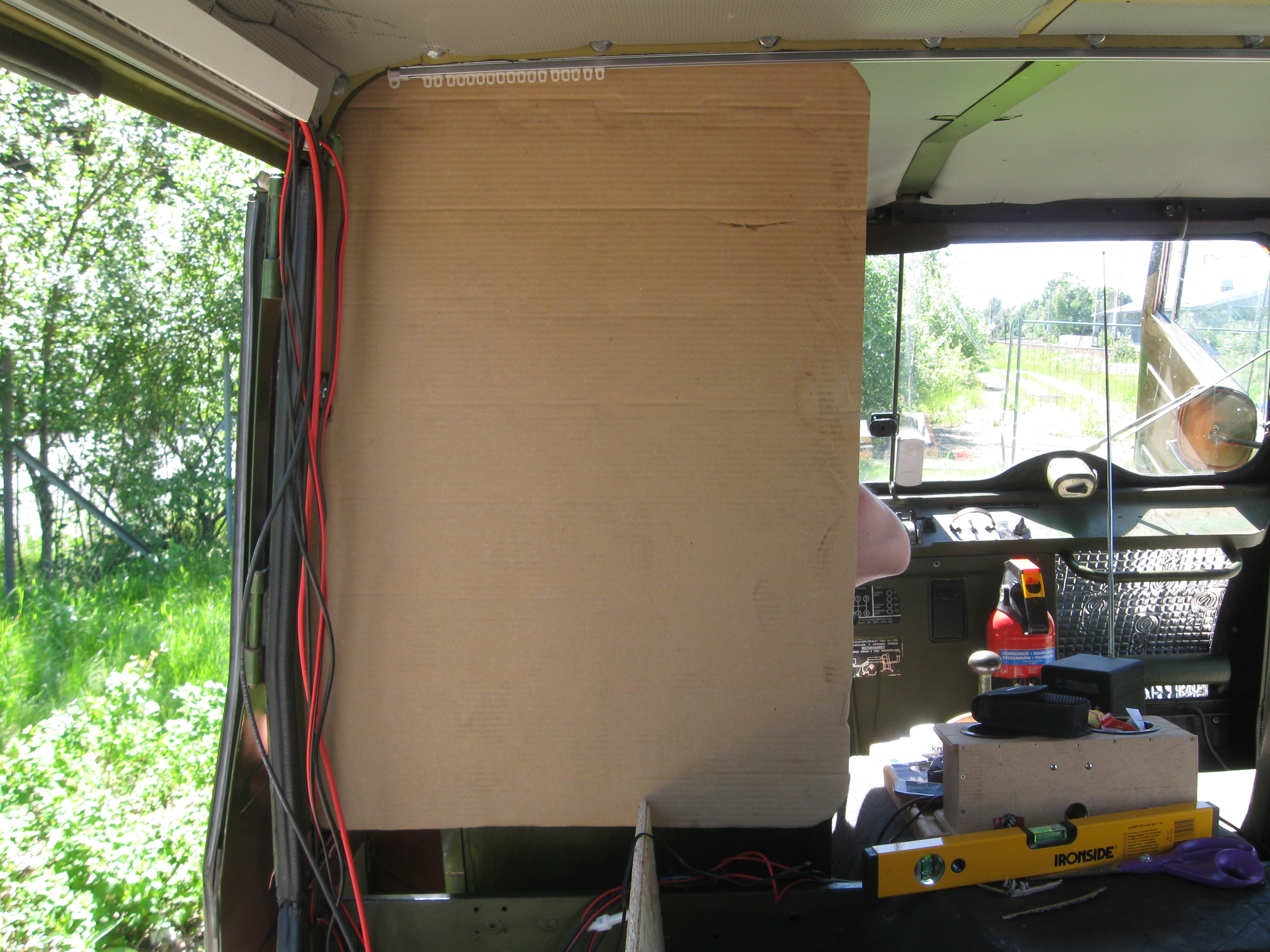 Carboard template
We decided to put boards behind the seats, which on one side would be part of the fridge holding structure, and on the other side could be used to attach things like cloth hangers or small shelves.

This time, we were smarter: We had collected a bunch of large cardboard sheets, and we used them as templates.

Marking with a pen, cutting holes with scissors, putting back, correcting the shape, etc... is much easier on cardboard than it is with plywood.

When the template finally nicely fits, it's just a matter of reporting the shape on an actual piece of plywood and then to cut around the lines.

After a bit of trimming here and there, the first wall section is finally installed, and to build the passenger side it's just a matter of doing the same thing, but with the template positioned the other way around.

You did not really except that to be that easy? Did you? 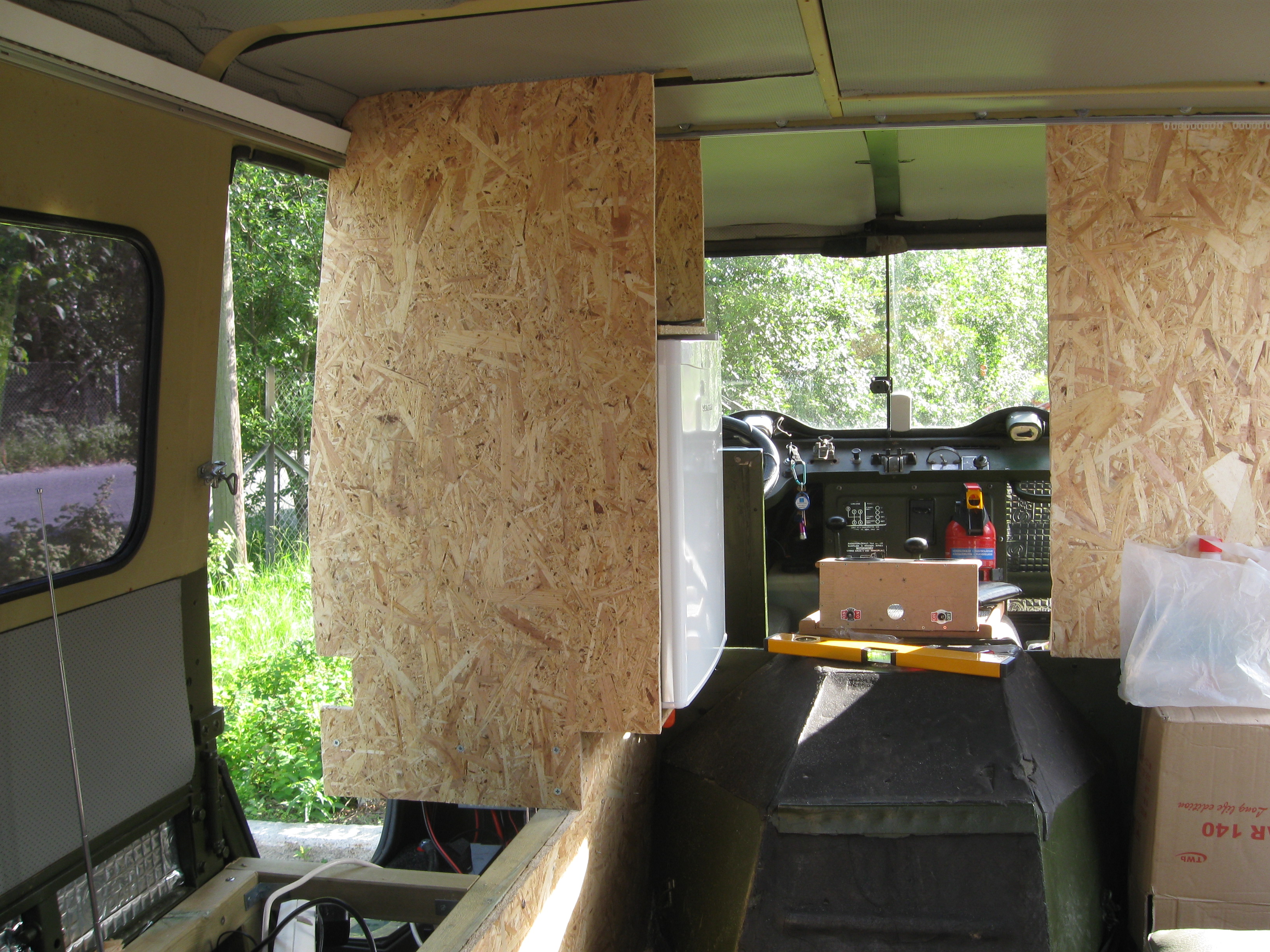 Final assembly
Do you remember what I said earlier about the Valp being a tricky beast regarding the curvature?

Well, it happens that on the blueprint it looks like the engine compartment is nicely centered on the floor plan.

Guess what? It's not.

It's actually offset by about 3cm toward the passenger side, which means of course that second wall is about 6cm shorter than the other one.

Ultimately we managed to get everything cut at the right dimension, sorted out the differences, and there you go, our fridge was finally nicely installed in it's beautiful new cupboard2. 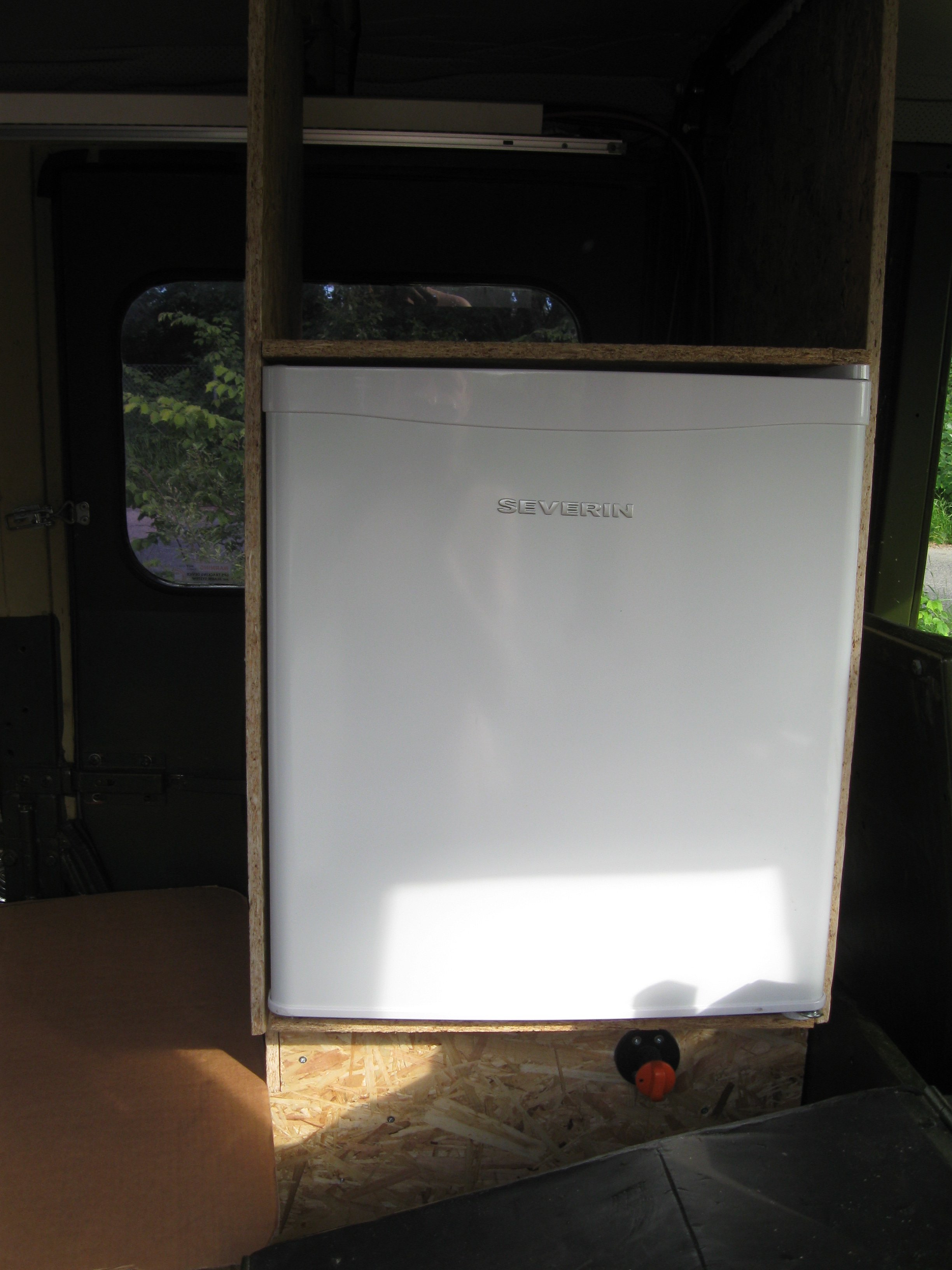 The fridge installed
1. We also had a circular saw, unfortunately the start-up power made the inverter security to trigger so we could not use it from the car power system.↩
2. It will later be covered by a nicer material :)↩