Custom Shaders
Thu 21st July 2016
Original stateCurtainsSolar filmBlindsSliding Windows
One of the important things in a recreational vehicle is comfort.

Many things impact comfort, such as the quality of the driving experience, the sitting, the noise, but when you want to sleep in a vehicle what really matters is to be adequately shielded from the sun and be able to breathe! 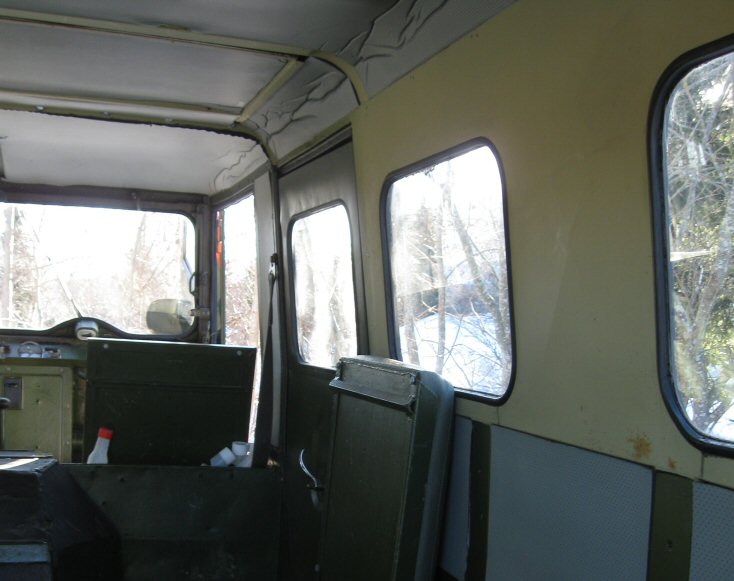 An empty canvas
When we bought the car, we pretty much had a blank canvas.

Sure, the original owner had installed some wood cabinets and a fireplace, but that was it: We had transparent windows that could not be opened, and there was no way to sleep because of the light.

From that point it was pretty much an incremental process, some ideas worked well, some were discarded later because they were causing too many issues to be really worth keeping. 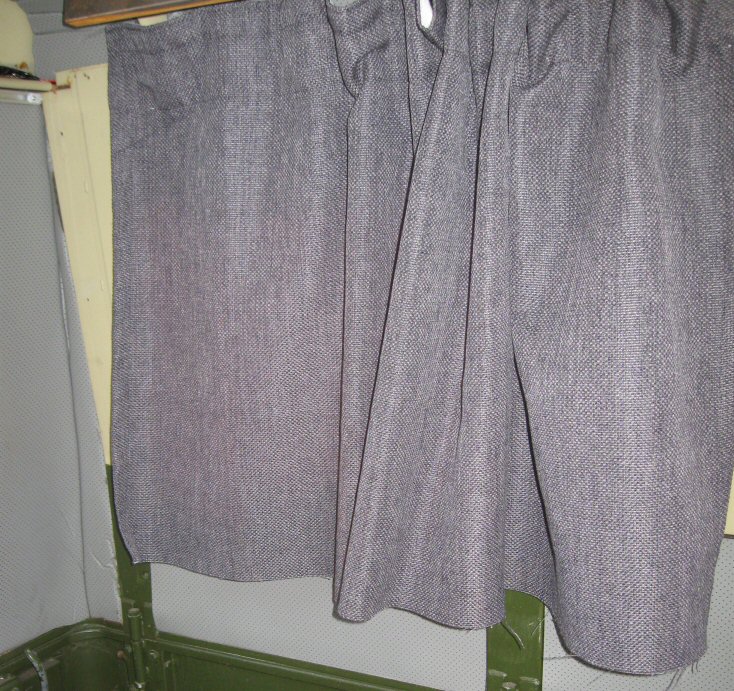 Ugly curtains
The first thing we did was to install curtains.

We bought some aluminium rails, cut them to length, and installed them at the top of the frame where the internal double wall stops.

Then we inserted a bazillion of these small white plastic attachments, and passed the curtain hooks through both the gliding elements and the top of the curtains.

Since we did not have a sewing machine we were not able to do a neat finishing at the bottom, so it looked pretty much like what it was: a length of thick fabric cut approximately with a pair of scissors.

It was ugly as hell, but it did the intended job, it was now possible to sleep in relative darkness.

Curtains and dark windows
On the negative side, these things kept getting stuck in the rail, we broke many of the attachment points, and the fabric was leaving long threads all over the place. Also it was annoying to sleep because we kept touching the fabric when rolling around in the bed.

On the positive side, these rails are the perfect width to install LED strips.

One of the best ideas we had was to install the dark films on the windows.

Not only did it work brilliantly in helping to reduce the sun glare inside the car, it also really helped on the intimacy side, making it very difficult for people to see what we were doing in the car.

It's very easy to do, just take your time, make sure that things are cleaned properly, and if you are not good at that just ask your partner to do it!1 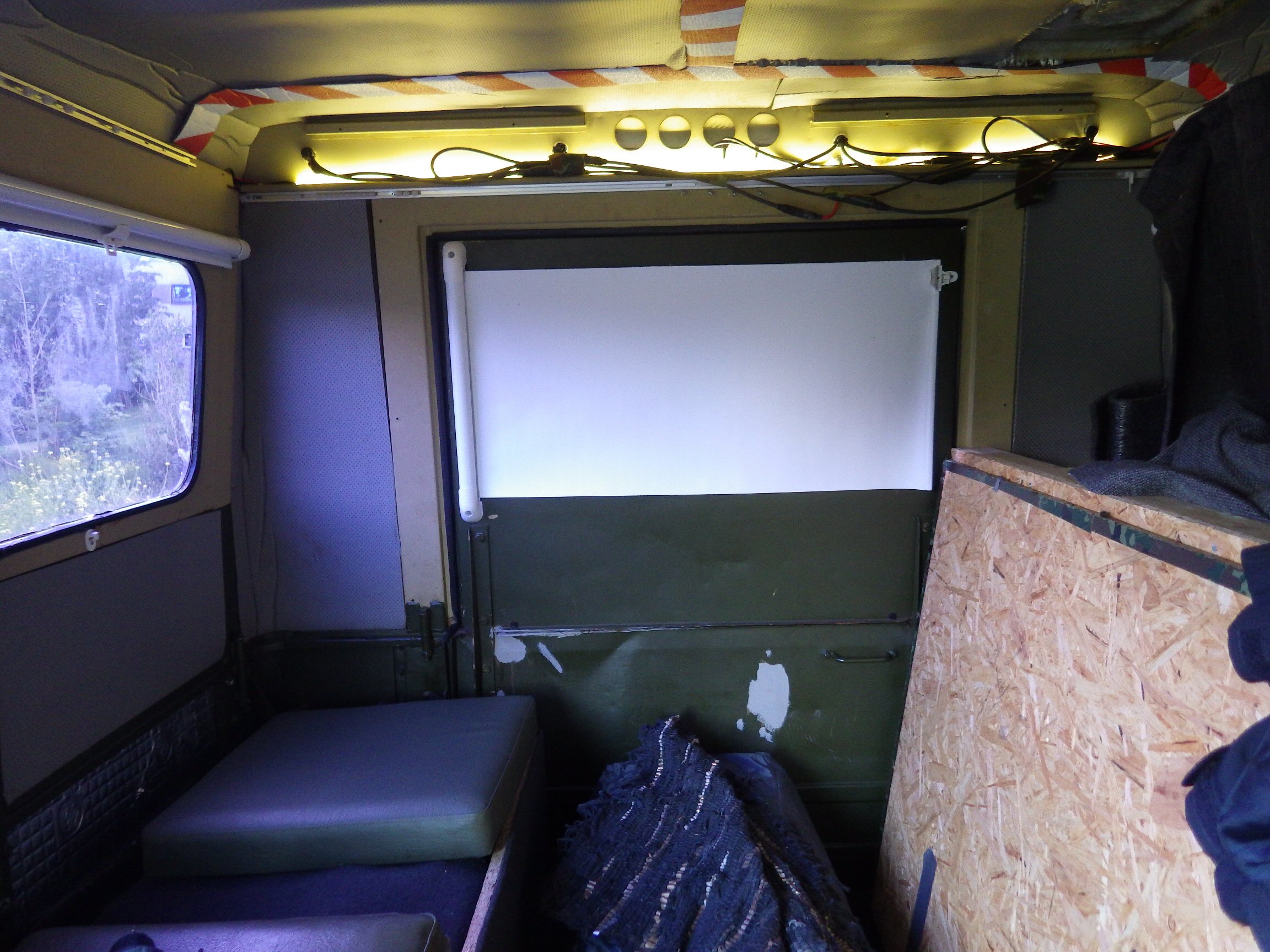 These things are trivial to install, just two holes to drill for the screws at the top, and one more for the hook at the bottom.

Installing the one on the back door was a bit more involved because the required size did not exist.

I spent some creativity points, bought a very long one, cut it into two, and finally installed it horizontally instead of vertically.

That worked just as well :) 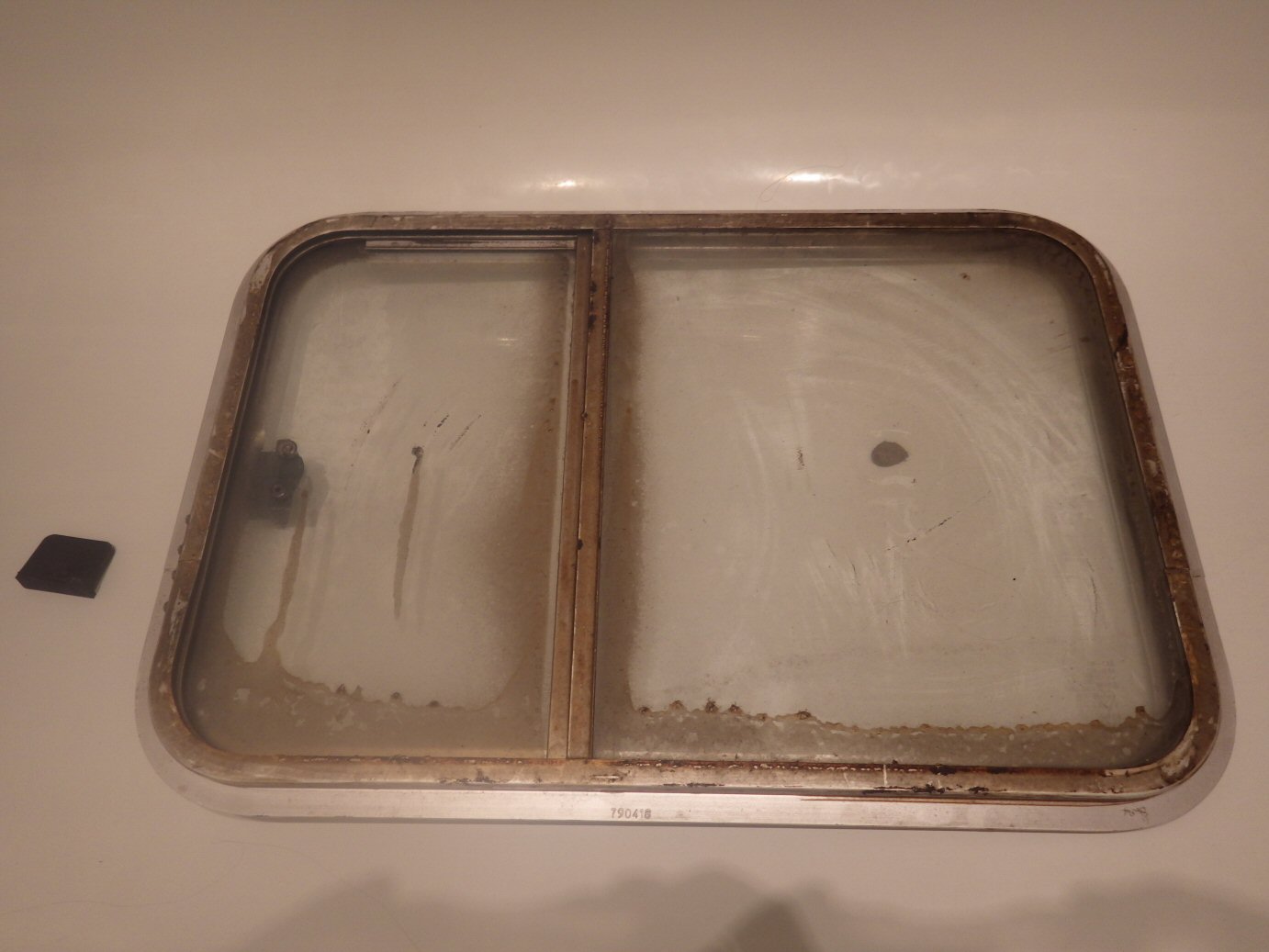 Our 'new' sliding windows
At that point we were still kind of suffocating at night, so we had to keep the back door slightly open so we could have fresh air while sleeping.

I don't know about you, but I never did like the idea that somebody could come in the middle of the night and open the door while we slept.

A few months ago somebody posted a photo of a similar vehicle on the Norsk Volvo Felt-register facebook page, exhibiting the holy item: two sliding windows!

I asked where these things could be found, and I was answered that these were from a Radio Valp model, and that a particular place2 in Sweden had them available.

I contacted the place, and they answered that:

I let you judge the 'New' criteria from the previous photo showing how I received them, full of dirt, oil, layers of old dried sikaflex, and latches made of plastic so brittle that it broke into two pieces when I touched it.

Oh, and one of the frames had a bent corner, probably from when they removed them from an existing vehicle. 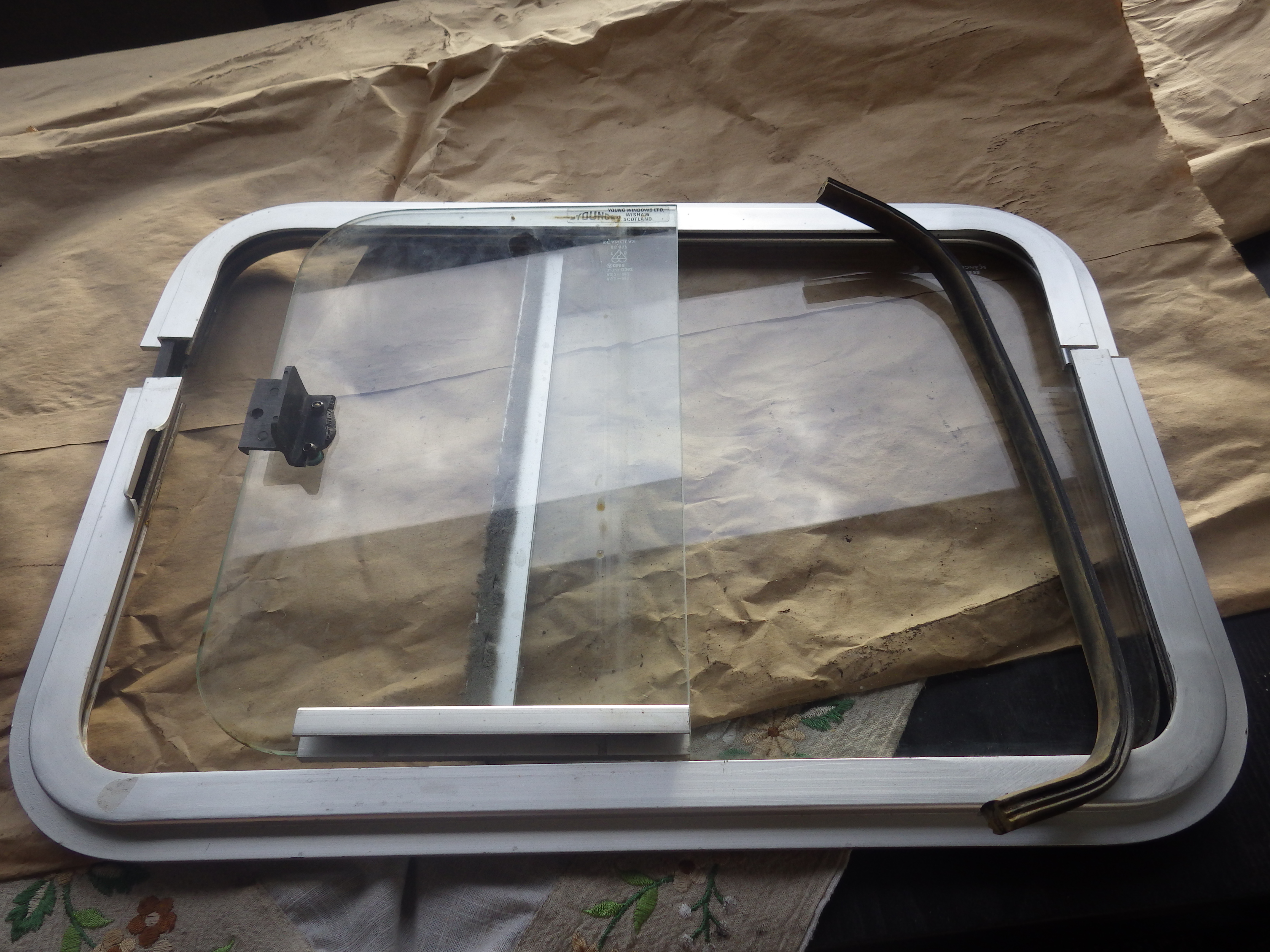 After disassembling and cleaning
Anyway, I had two windows, which as far as I could tell would indeed fit as valid replacement, so I spent an incalculable amount of hours disassembling the windows, removing the rubber parts, then scraping delicately with a knife and cleaning with alcohol all the places until it looked more presentable.

The next step was to find a way to replace the broken handles.

The handles were made of plastic and attached to the glass using some heavy duty pop-rivets which I had to drill out.

I checked online if the company who originally made these windows3 still existed, I found it but did not lead anywhere.

Since I had lived in some apartment buildings that had a similar latch mechanism for their balcony door I did a search and found a product that seemed to have approximately the right dimensions, here is the name so you can source them if needed4: 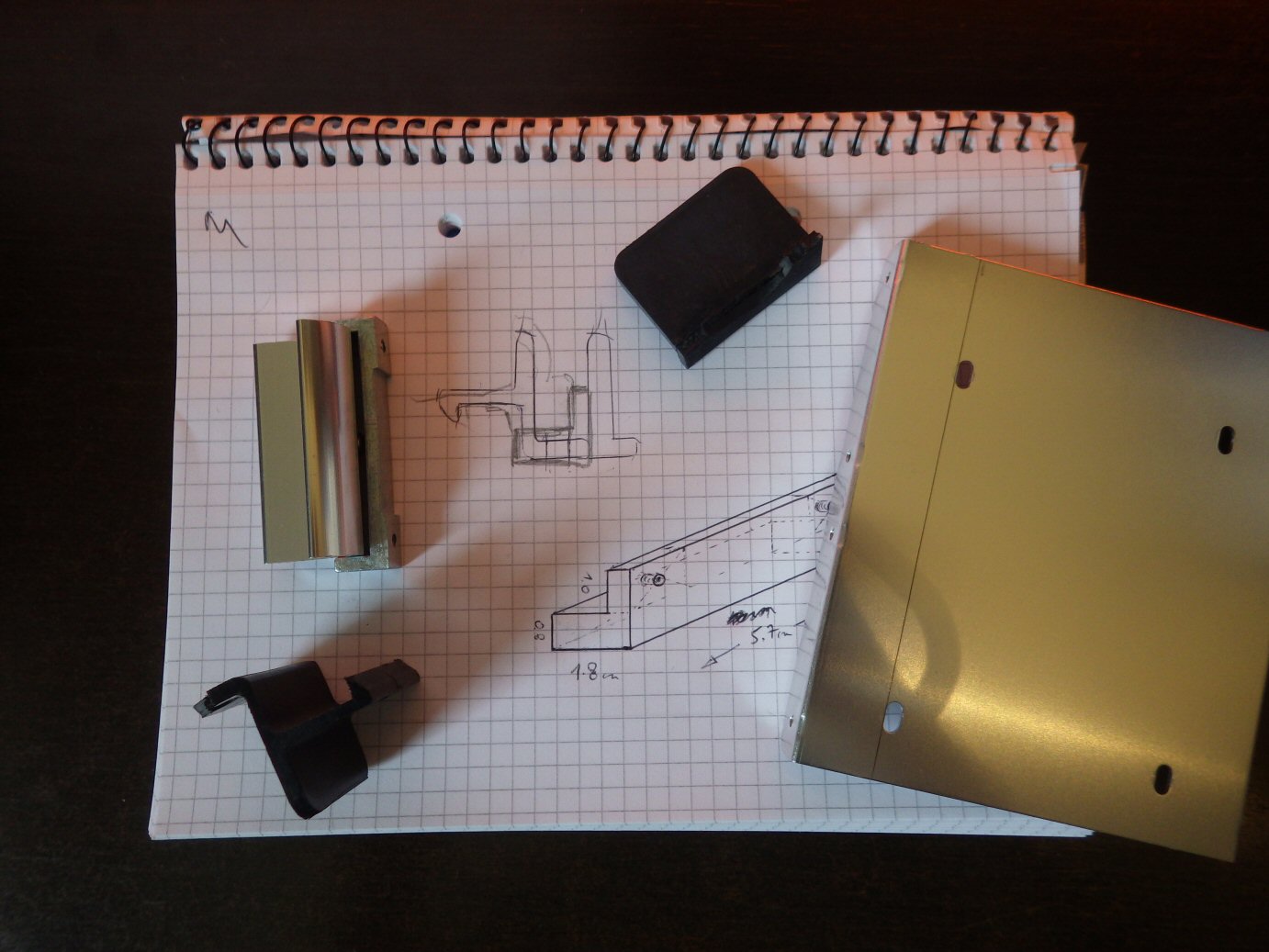 Building replacement latches
Of course, it would have been too easy if the mounting had been directly compatible with what I needed, but well, I'm used to that now :D

I followed my usual 'let's check in my stuff if there's something I could use' and found out that an aluminium 2.5" to 3.5" hard disk adapter would be a perfect fit.

A bit of drilling, some spacers, some nuts and bolts, and there you go: A brand new set of shiny handles! 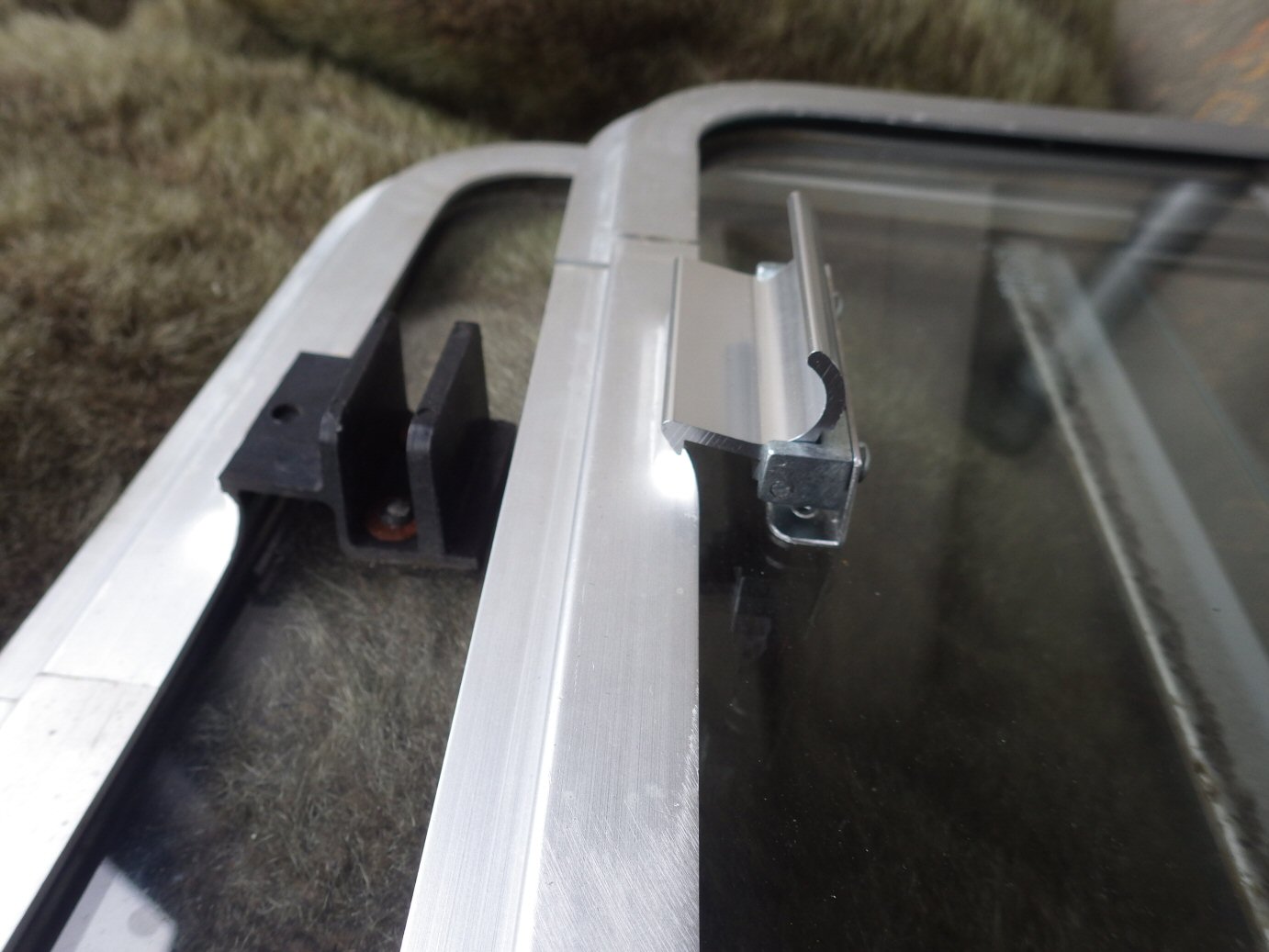 The new handles
I hope you will agree with me that these look much sharper than the originals :)

I may have to tweak the number of spacers to adapt the necessary strength required to open and close them, but so far they work well enough.

Of course, since these windows were intended to be replacements for our existing windows, it would not be super awesome if they were not tinted as well. 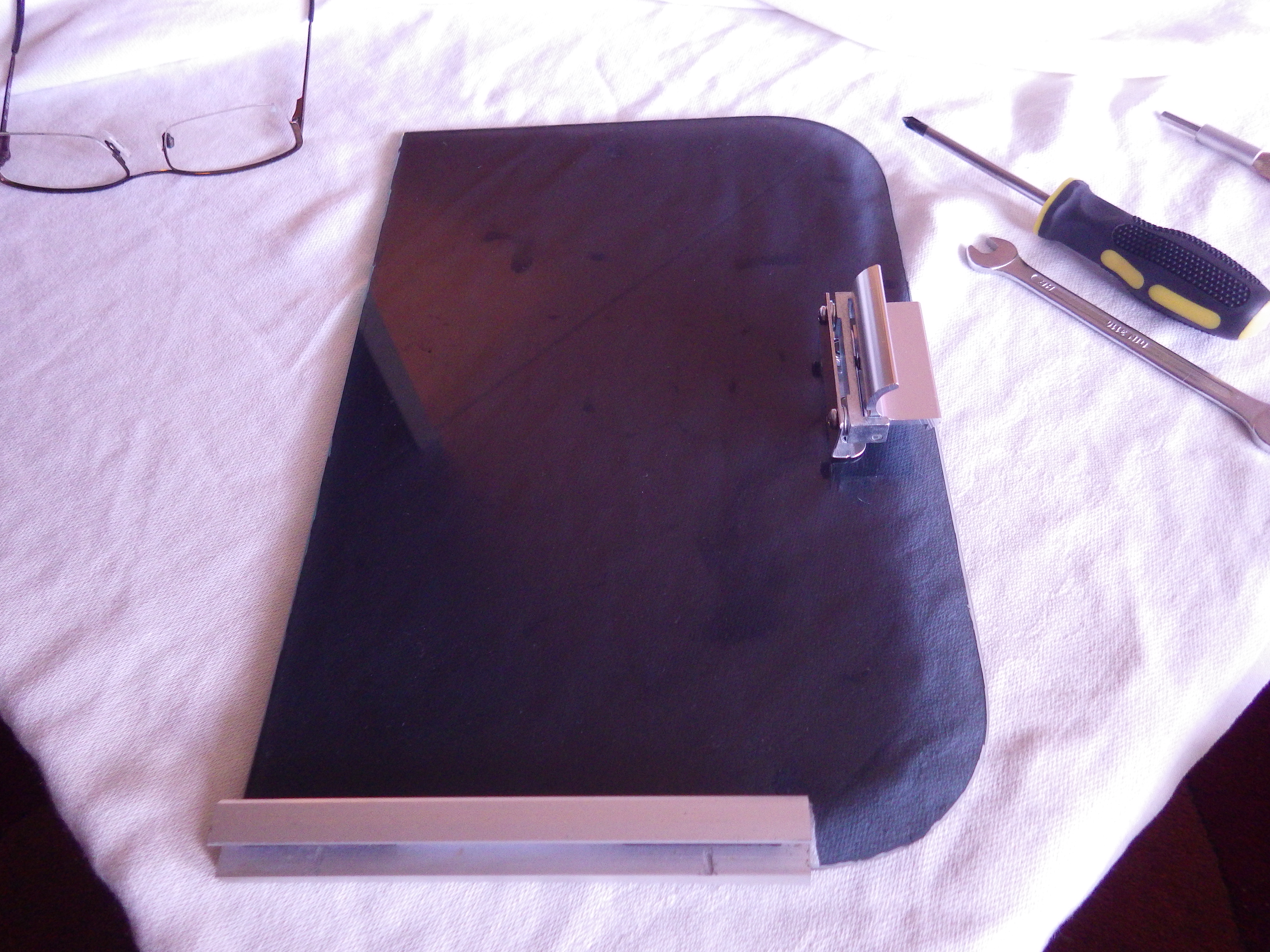 So badaaaassss
As usual it's Miriam who took over the operation of applying the black film over the windows.

The shape was definitely much more complicated on these windows than on the previous one, requiring us to do some cuts to follow the shape of the aluminium sliding guide at the bottom.

Other than that the only other difficulty was to make sure we would not rip out the new film when installing the handles and reassembling the windows. 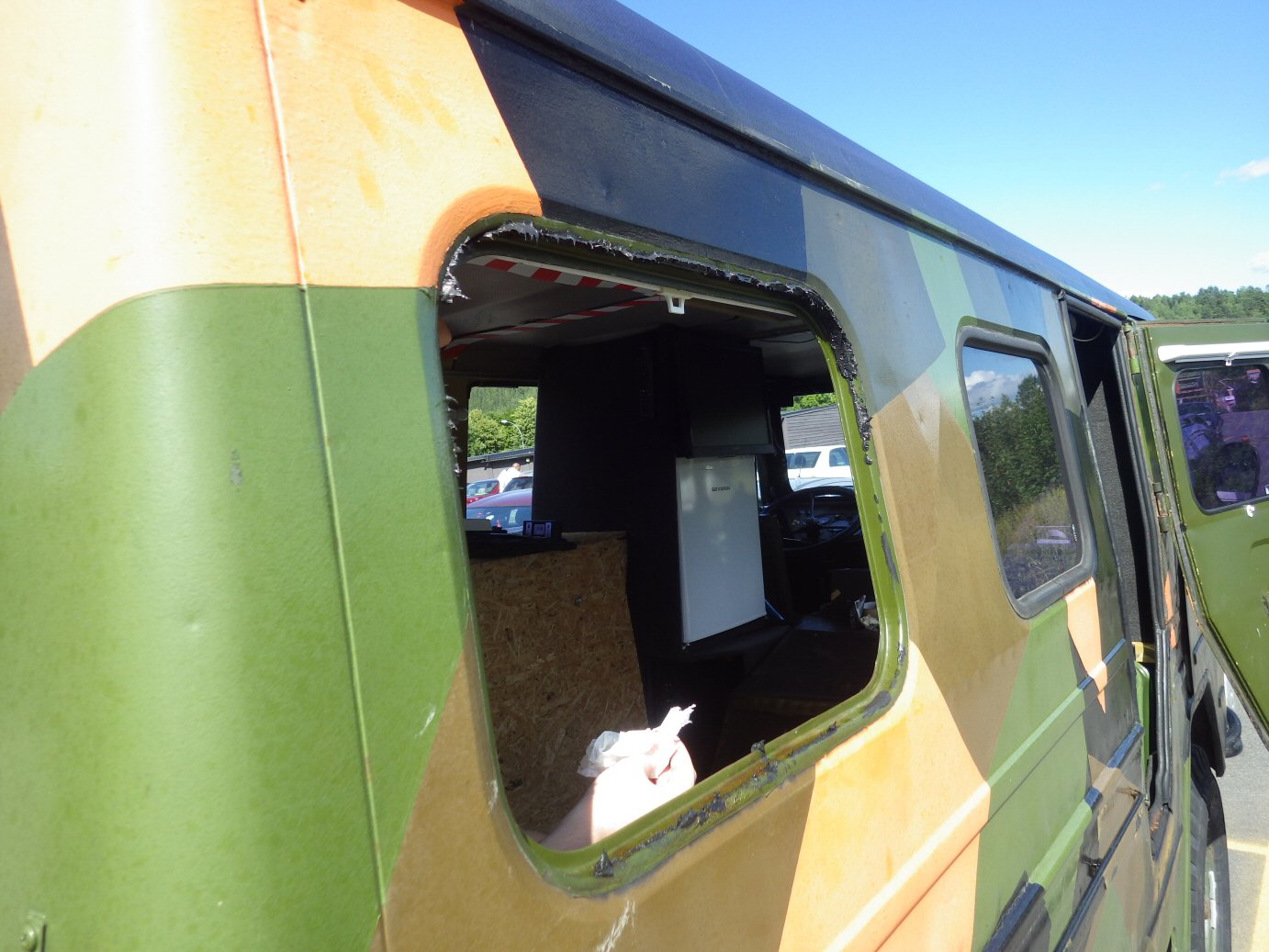 A messy gaping hole
Changing windows on a car requires either a garage, or nice weather.

Since we did not have the former, we had to wait for the latter...

We fumbled a bit on the first window to find how to remove it, but with the right tool we finally managed to find a decent method.

We had decided to reuse the original rubber seals if we could because the new ones were of a different type and would have taken more room on the inside, possibly forcing me to move the location of the blind hook. 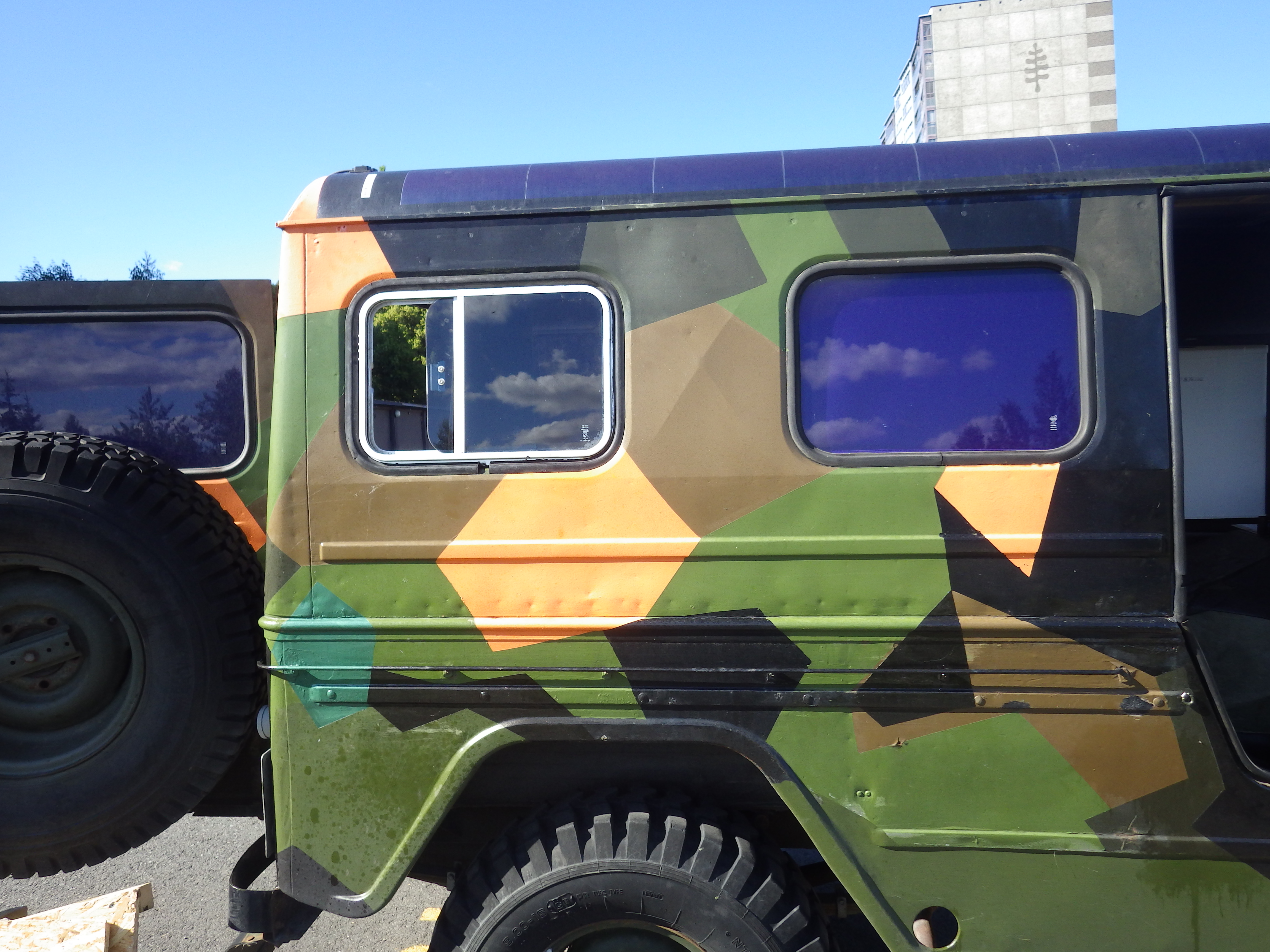 And.... it's done!
Fortunately we were able to cleanly remove the rubber, but we had to get rid of the large amount of sikaflex5.

Putting the new windows took a bit of trial and error, but I finally tried the rope method6, and it all just worked!

We are now the proud owner of a hard top version with sliding windows.

If you look at photos of the Swedish model you will notice we did not put the windows at the same location:

The reason is that we are sleeping with the head toward the back door, so we can each easily access the window handle while sleeping :)

It was a bit long, but I hope it was worth reading.

1. Miriam is now level 26 at installing these.↩
2. Ask me privately if you want to know, I keep their name silent to protect them from infamy↩
3. Young Windows LTD - Scotland↩
4. I'm not providing a link, it will probably be dead if you read this article in few years time↩
5. Also scientifically called 'the shitty black messy stuff that is impossible to remove from clothes'↩
6. Put a thin rope inside the rubber slot and use it to pop the lip of the rubber out, starting by one side then the other.↩